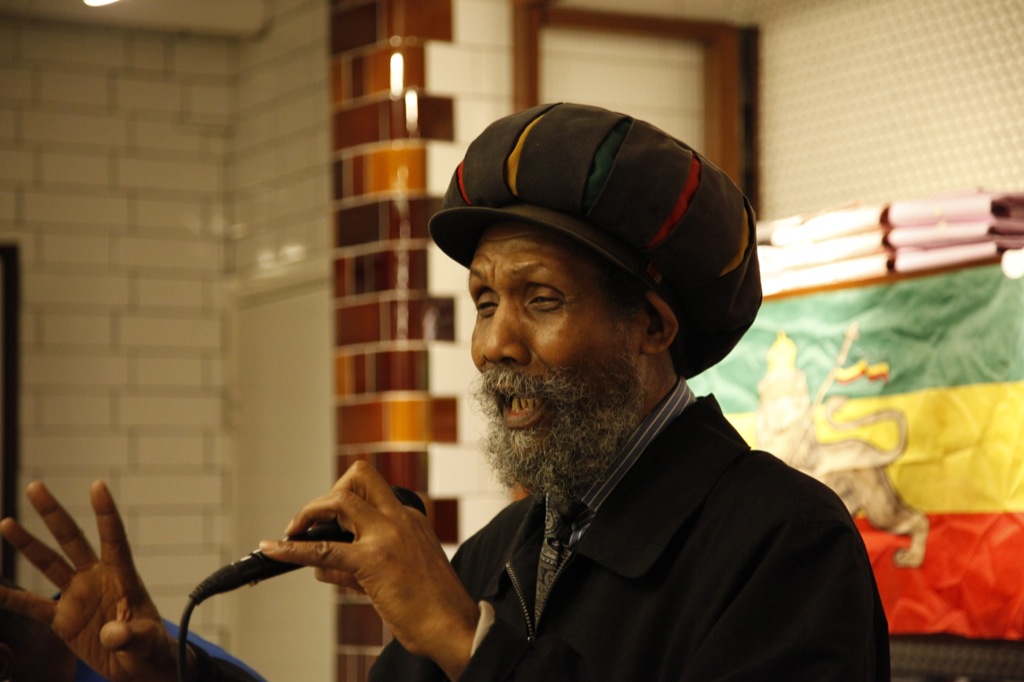 Lloyd Blackwood better known as Sir Lloyd Coxsone, a tall slim man hailing from Morant Bay, arrived in England in 1962. Since his arrival Coxsone has been based in South West London and has been involved in    the subterranean network of blues and sound system dances in that area. Then Coxsone has becomed the sound against which all others are judged, becoming    an influential figure in the growth of the UK reggae scene and sound system culture and business. He says “it is a good business” will also concede “it is a hard life, uncertain. . . today up, tomorrow down. We have been up and down many times but we have experience. To run a good sound in the UK is teamwork… a young team of men who are ambitious, record crazy and have young ideas, If I get old within my ideas there is many young men who come up with suggestions. By building a team you are building your sound for a long term. In my time in England I have seen a lot of good sound die ‘cause they didn’t build a team to manifest the work of the sound. Teamwork and effort is crucial as you can’t live off your name.”
During the mid-80s Coxsone handed control of his sound over to the younger elements in his team, notably Blacker Dread, and a new breed of DJs. Blacker released his own productions by the likes of Fred Locks, Frankie Paul, Mikey General, Sugar Minott, Michael Palmer, Don Carlos, Earl Sixteen. Recently, as interest in the roots music of the 70s has increased, Coxsone has emerged from his semi-retirement to stand again at the controls of his sound.
Lloyd Coxsone sound was the first UK system to play dub, that they set the pace in equipment and pioneered the use of echo, reverb, equaliser, and also in paving the way for a sound system such as Shaka to take sound to a new dimension, creating atmosphere out of rhythmic weight and effects. Sound system has come a long way since the days of Lloyd the Matador, Coxsone first sound system, when upon asking an electronics man named Fred to build him a 600 watt amp, Coxsone was greeted with: “You must be fucking crazy. Do you know how much power it takes to drive a cinema? Ten watts!” The past 15 years has seen a shift from one extreme to another, and the banks of amplifiers in evidence at any sound dance are testimony to the current fixation with wattage rather than, Coxsone feels, an ability to select and present the music. “People can’t dance to wattage. If a man comes to me and he deals with sound he almost always deals with wattage. Listen, the more you step up weight you lose quality, and a man must be able to hear your vocal playing. Too much sound in this country is running down weight, but I don’t see sound as is rootin’ down like bulldozer as good sound. I am more interested in quality and selection of music.”Different philosophical attitudes result in different approaches. Those who have witnessed Shaka and Coxsone in dub conference will know that in following Shaka’s distorted swirling dubonics and sheer physical weight, Coxsone will operate one piece of amp less and maintain a sharpness and a clarity, a kind of “round beat” and initially let the music do the work, before Poppa Festus – the Coxsone Hi-Fl controller– puts on the pressure, injecting tension into the rhythm and building the climax into the dub cuts. Playing reggae and presenting reggae are two different things, and to Coxsone playing a dance means more than catering for the militant steppers who mainline warrior rhythms. “We think of our dance public all the time. I am supposed to select music for the people to dance to, that is our job. That’s hat they’re paying us for. If I Lloyd Coxsone am playing as a disc, I like to have the majority of the people dancing. I have no other excuse than to make people enjoy themselves, and I can’t do that if I’m not fit to do my job.””We have to use our brains. You just can’t sling record onto the turntable, it have to be selected. Each rhythm coming after a next one have to be directed so that if you play a song with a certain argument you must find a next one with an argument to match the first.” Lloyd Coxsone’s reasoning and observations on sound are incisive and revealing and he is justifiably proud that “no other sound have achieved what Coxsone have done for reggae in the UK”. In its heyday of the 70s and 80s, with an endless supply of superior dubplates sourced from top producers in Jamaica, augmented by some of their own productions cut with high-ranking music makers in the UK, Sir Coxsone was undeniably top of Britain’s sound system circuit. Their superior selection and the manner in which they presented it to the public gave Coxsone the kind of credibility that most other sounds were never able to achieve thanks to the unbeatable tag-team of proprietor Lloydie Coxsone and his star selector, Festus, and an ever-changing crew of supporting members that kept the sound perpetually fresh and innovative.

“I brought that test pressing to England and start to play it, and it’s the first time people hear the name Burning Spear.” Lloyd Coxsone

Sir Coxsone Presents “Uniting The Tribes Tour” is a series of shows celebrating sound system culture to be held throughout the UK during February 2020. Each show will feature an impressive line-up of UK sound-systems led by the legendary Sir Coxsone, who recently marked his 55th anniversary as one of the world’s leading reggae soundmen. Other well-known names already confirmed include Mad Professor, Aba Shanti, King Tubby’s in addition to a growing line-up of singers and deejays.
Interest in reggae sound systems is currently at an all-time high, and there’s a younger generation of reggae lovers from across the world building their own amps and speakers, cutting dubplates and starting record labels in greater numbers than ever before. The MCs and “live” mixes that were synonymous with reggae soundsystems of the past have returned, and there’s now a wealth of festivals, films, exhibitions, books, online communities and academic studies representing all aspects of sound system culture. It’s had a massive influence on genres such as hiphop, drum & bass, UK dub, and grime, and also left an indelible stamp on fashion, language and a range of other lifestyle choices.
The sound of young Jamaica first came to the UK after WW2. Early sound systems helped provide a sense of belonging and purpose, as well as a platform for aspiring entrepreneurs, technicians, carpenters and performers.
“We had the best set of sound-systems here and the most reggae music, even more than in Jamaica,” says Lloyd Coxsone. “We are the ones who establish it and then expose it worldwide. And we bring a spirit to other people because the sound-system is a joyful thing really. We want to see people smiling and looking happy, y ‘know?” He and other well-established sounds like Channel One are keepers of the flame. There’s history and cultural resonance in every note they play, and years of unwritten tradition in their approach. They’ve learned their craft the hard way, and bring all of that knowledge to bear when stood behind the decks entertaining a crowd. These Uniting The Tribes events are intended to convey the thrills and experience of witnessing authentic UK reggae sound-system culture first-hand, in venues across the UK both small and large and to unite all the soundmen on one tour which will spread their message of unity and belonging.[:]