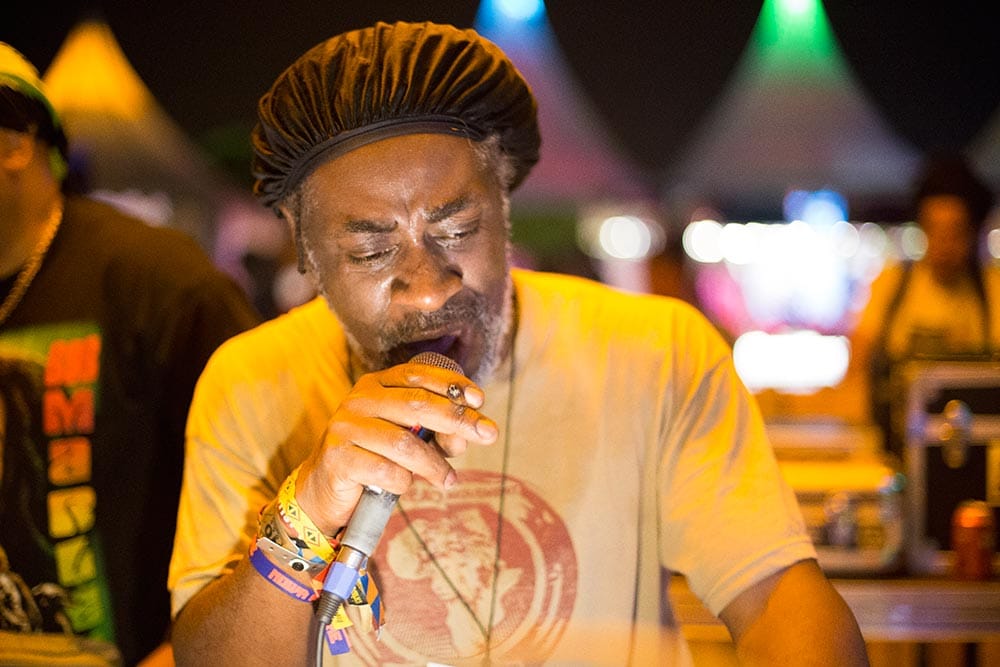 By segzineadm |  INTERVIEWS, SOUNDSYSTEM CULTURE |  14 October 2019
[:en]Murray Man has been involved with reggae music since the 80s, selecting and DJing on Birmingham soundsystems. By 98, he started producing on his own label Mellow Vibes, releasing his own as well as many other singers’ material.
Murray Man is a versatile performer, and his varied styles range from old school DJing to soulful singing, always with a positive uplifting message, which has made him famous across Europe. Specialising in UK Roots, he has released music with many labels such as Roots Spirit, Cultural Warriors, Mungo’s HiFi, amongst many others His latest release on Friendly Fire Music is Get Away  on the Legalize Riddim played by Friendly Fire Band

1: can you tell us how, where and when you attended the first time a sound system session….
The first time I saw a sound system back in the old days was Mafiatone & Quaker City, this was back in Birmingham in the late 70’s, those times were very different because it was all valve sound, people were going to dance more and many sound were bringing people and artist to play from Jamaica … so it was Quaker and Mafiatone and upon the mike were Bongo Tyrant and some more men now I don’t remember, it was a long time ago but I can still close my eyes and feel how the bass were bumping and how the boxes were playing…because    at those time we were used to play in a theater or a cinema where there were seats in the middle, we were removing them to have more space…because there were to many problems with the venues and club owners.

2: what you can tell us some info about the story – about Coxsone and Duke Reid – and how was the vibe ….and more…
Well the first thing to say about reggae music and Jamaica is that the original place is Jamaica, where all started and from where all this vibe came to UK with immigrants … they demand Coxsone, Duke and Vin …they wanted to carry the music with them to England so to carry the vibes of home places with them …and not only to play to the people but also to make an identity statement because coming to England for my people and parents was very difficult, they couldn’t get the music they liked and so they couldn’t party, so anybody who bring them sounds from Jamaica,    bring them music….the people use to go to small bar and nightclub to have some good time…so these sound were very important also abroad and especially here in England, these were the guys who actually spread the reggae music network too the discendents of Jamaicans who were living here in England..

3: for the people who don’t know you, how you become involved with music..how you become involved with music and singing, …how you become involved with sound system people and where……
All I was involved in reggae music was because when I was young for 5 years during the summer for school holidays my parents were taking me back to Jamaica and when I was getting back to Jamaica I began to realize the difference between the Uk living style conditions and the Jamaica style of living ….and to be in Jamaica with animals, in the country compared to the uk cities was nice … in that time you had area sound system, basically sounds that used to play only in their area….in England there was a transformation when people wanted to get involved with the music and for us, for me getting involved with the music was like … my father was bringing back records every time he was back from Jamaica, he used to have little boxes, some seven inches and some lp and he was used to get them with him to England because these musics remaind him of his roots, who he was and were he was coming from…so being in England and having the sound system playing the same songs was kind of…..it remaided who I’m whom ….were I came from…and yes he come back with a lot of these records, I was to young to play them on the gramophone and my fascination started from then….once my father opened that cabinet with inside the records and finally I was able to play that music, I was happy to sing the words, I was happy to mime it, I was happy to play the version and even to try my own freestyle on the riddim…and eventually people started to look at a little youth – 11 to 13 years old – try to freestyle and they were always saying all good things about me, trying to encourage me – you should carry on – people in the music industry think that when you are young, if your parents don’t push you to do it, they think it’s a waste of time because only with parents help you can do this…my parents brought me to England to study and get and education to became dentist, doctor or mechanic and any so far… and not necessary to be a musician….so at that time in the music business I carried on to sing like dj and try to make music with friends in the neighborwood and once again.. we didn’t have a sound system but we had sound system in the neighborwood, then we used to go around where they were used to practice every thursday, trying to freestyle, trying to get involved with them… at the was my first involvement with the music.

4: musically ….what were your influences when you were young    and what you like/liked most…who influenced you most as a singer …..what about Jamaica in those days, ghettos and badman, how influenced your singing……
It started really with lovers rock -    baby I love and things like that    – and then appeared culture sounds, really    I grow up on that style because that was my father music, the culture style and the babylon fight things was there too at the same time but the love music was taken in the home of people, the roots and the rasta movement was there and once again my father didn’t play to much of it but he had a collection of it and on the same time I could pick up some artist I cherish and big up, there were many artists I used to listen, Delroy Wilson , Junior Marvin, Lee brown , Gregory Isaac…naturally Bob Marley was among them because he was the one to break down the barrier with Chris Blackwell but there was also a lot of sides artists that we are used to listen and influenced me to create a vibes on my own to spread to the people.

5: what do you think about sound system in Uk/London ….. difference with Uk/Jamaica/London…. can you tell us ….who you knew, worked, had collaborations in London/Jamaica sounds
For the sound system in London or Uk at those time was very important what was in faschion and was going on in Jamaica…. because when I was young and my parents bring me back to Jamaica, I used to listen every year to this sound system named V-Rocket and there was V-Rocket in Uk and there was V-Rocket in Jamaica…..and they used to play at one festival in the park in Uk …we were going also to see the boxes, the amplifier and to see also the way they were selecting and playing tunes and they were serious about the music…it the same things,    Jamaican descendent bring back to the Uk their music to ensure the people “ we wanna make our own party”…because the people in the Uk didn’t recognize and know reggae music before we bring that to them, they didn’t recognize until we arrive, this was the reason why our parents soundman brought the music from Jamaica to the Uk and to remaind us our own tradition and culture, they used to keep blues party…….A blues party was when you had a big house and you take out the furniture like it’s a birthday party and we were bringing down the sound, 3 or 4 boxes as a set up and put a set up in the biggest room and used to play these reggae music from Jamaica and the new reggae music coming form England in those days.. …we all relate to that because I remember my father and all the parents so happy to listen to this music when we had the sound system.

6: you have been involved in the    reggae scene since a long time, can you tell us something about Reggae in the last decade…..how about streaming, vinyls and concerts in this period….and especially now in 2020 …who do you think, next….
A lot of people in Europe and uk are getting involved with sound system business and reggae business but what the people must remember is that music is a vibe where people find to free their minds what ever kind of music we are speaking about ..jazz, rock’n’roll, rock, reggae, house…..what ever……people go to a dance and free their mind…what I find is that music is changing depending on the time…..before I loved dancehall but now it’s kind of getting slack, they use a lot of slackness and It get more with explicit lyrics, the culture of the music is still there but people have started    to follow the slackness but it’s more open and related to the DJ vibes coming from Jamaica ……I meam, reggae music has supposed to speak to the people about love and culture, explicit music is not for me, I don’t listen a lot to dancehall ….the young generation listen to that and for me music has changed dramatically in these time ….and by the way a lot of people are getting involved in Europe with the music themselves…

7: what do you think about reggae in Jamaica    in 2020…
Well reggae in Jamaica ….as we know the rasta comunity started in Jamaica, as you know Selassieh go there to enlighten the people…me then I’m a rastaman, I preach love and culture to the people and back in the days of 60’s and the 70’s it was very poorfull to listen to rasta songs, many artist were rasta and very poorfull and even if they weren’t rasta, they were conscious about the culture, they believed in god and were singing this in their songs… as time go by it started to deteriorate ….because a lot of “I love you“ songs come into the game and dancehall slackness come into effect ..there is no a balance in reggae music anymore, the music is very unabalanced…

8: reggae in the europe ..sound system culture in uk, france, italy and spain germany is this the future?….
No it’s not necessarily that for me …..because when I hear the reggae music, I listen is as the cry of the poor people of Jamaica, I’m the descendant living in the uk where my parents brought me here and here it’s a different life…and for me this is a part of that story, I sing my rasta songs from my heart and at the end of the day other culture can pick it up and play a part…..

9: sound system as a culture, a business or    just the “voice of people”……?????
Some people want to use it sound business as a proper only business    and some others wants to use it as an enjoinment…but right now music is free as always…..[:]