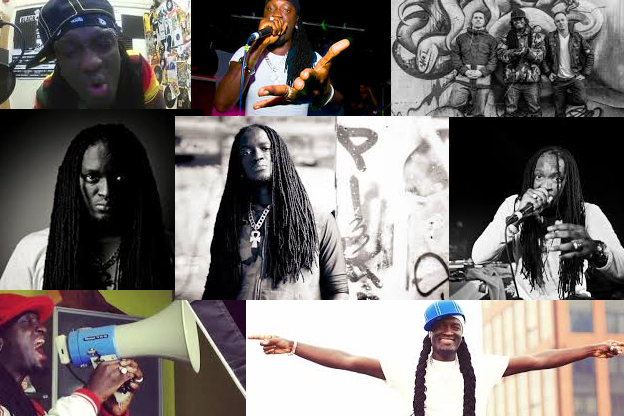 Blackout Ja is a dynamic performer and is considered revolutionary in his approach to reggae music, using his music as a tool to fight oppression and set the captives free and entertain. Growing up in a musical household in Jamaica, he was exposed to various styles of music from a young age. He would hear his mother sing in a choir at church or be in the surroundings of his father and friends with their sound system. Blackout Ja has worked alongside international reggae stars like Sly & Robbie, Tanya Stevens, Freddie McGregor, Luciano, Lukie D and Gregory Isaacs.
Within the last 5 years he has performed alongside Courtney Pine, Beris Hammond, Buju Banton, Mighty Diamonds, Big Youth, Luciano, Julian Marley, Barrington Levy, The Beatnuts, Aswad, Mikey Dread, Macka B, Culture, Misty Roots among many other great acts.
He has performed on Sting (the greatest one night reggae show in Jamaica) 4 consecutive years, Border Clash, Beach Line, Reggae Sunsplash, St Paul’s Carnival, Luton Carnival, Notting Hill Carnival, Ashton Court Festival, Birmingham Carnival and many other festivals. He has appeared on tours in Europe and Africa.

1:can you tell us how you become involved with sound system?

I grow up in a community in Portland Jamaica, music meant a lot to that community, music has always been a way of life, when we eat we sing, when we talk we sing, in any situation music had always that impact on my community, my father use to play a sound system, Universe from Portland, my mother use to sing in church, my grandfather use to play an instrument , god bless his soul because he passed away, so I started out as a lover of music which one day heard a sound system play , there was a dj from portland by the name of King Noah, who I heard djing, chanting.and he captivated me, he captivated my inner spirit, he made me feel a way like I never felt before, so music just call me, from there I started entering local talent contests , I used to dj in a sound system called Monday Love and the next one call Aquarius, I used to grow up in several sound system, so I entered a lot of dj contestŠ then we were like champion dj because of that energies,Šthe love for reggae music started from school , from a young age and I realize what meant music not only for the youth or the people who do the music but to all of us, the music is the vibe of the people, the music fight against colonialism, fight against imperialism it’s here to remaind us of who we are and where we must go.reggae music..so that’s is how we started

The first time I was a sound system.. I was going to a meeting with my grandmother, but she left before and not very far from where we live a sound system was playing I went into the yard as a youth and I saw the sound system, the big amplifiers , the speakers.It really was something else to see how it was been operated.I get cut into that world. I was hypnotized by the all action, I was there the all night, when I left to go back home, it was the first time my grandma locked me out , seeing a sound system..good memories!!!

3: reggae in the 80’s and the original sound system in London , can you tell us about your memories..

I can’t tell you about london , I was born in jamaica and I just came to england a couple of time and go back to jamaca, I learned the craft to be an artist in Jamaica.. in 80 and 90 the dancehall in jamaica when I was youth it was nice , it was the era where NinjamanMan, Shabba, Lieutenant Stichie, Papa San were great, there was the big superpowa Jammy Sound System and he used to play with Kilimanjaro, many sound system.. there was the time IrieFm in Jamaica just come in existence, it was the first time we heard a radio station playing reggae music all day. so in that time the 80 and 90 in jamaica, are the best time I can remember, beautifull times.

I was influenced by sound system and djs..me used to go to dance to watch that’s there was a dj by the name PapaSan, I realized as a young age that he was good, he has the lyrics.then Lieutenant Stichie, NinjamanMan, Shabba Ranks, Buju Banton but I love the old school of dj too, Ranking Joe is a general and I have a big respect for him like for Big Youth as well.all the respect to the foundation like Count Machuki , U-roy and I-roy to all of those who make it like Burru Banton who put a lot of effort in this music I was influenced not only by dj but also the by the singers and not only reggae singers because I wanna tell you something… Patty Label is one of my favorite singer and I love all kind of music too but I put reggae as the root and I want to be called a reggae artist because of the contribution that a lot of the reggae artist meant, a lot of suffering to put this music out big respect and long live to all the reggae artists and musicians…. Shelassie knows!

In the 80 and 90 in Jamaica it was more united and more about talent.. you need to have talent, If you were going in a studio in Jamaica, you had a producer like Colin Fatt, all the young upcoming singer were there and you need to have talent because when your time to voice a song, you need to be sharp because it’ wasn’t easy, when you need to voice for a dubplate back in that time, it wasn’t a pick up thing where you could voice a piece and then you could pick it up on and on on that piece and go on like that….no man…. you had to do all toghether because it was all straight to the end …no interruption ….no picks up, you had to be bad to do that and that is there I was growing up..you had to be bad to go up to the stage…. now it’s easier in many sense for the youth by the internet, it’s easier because there are more ways and opportunities as a artist to help yourself, back then the business was controlled by certain individuals as well, if you were doing a production with a producer and got some vinyls to do some promotions, you couldn’t go overseas and have exposition, only big artist and producers with already a reputation could do that ….but now with the internet it’s easier, even us a s veterans can use it to establish ourself , the 80 and 90 were like training school, like buckedfield, you had to be bad to sing, to perform for true …..now every single lickle youth can thing is an artist even he never eat, get food or badlife for that.in these days, even the worst one could make it now!

6:what do you think about sound system in uk-europe situations, problems and prospectives

Long live reggae and anywhere is been played it will be a precious love…… the situation is..and I’ll talk with no apologies… we are getting back to the colonial days, the days of the enslavement process, even in Jamaica, where reggae music emerged from the ghettos , the garrisons and one time reggae music was the rasta music and nobody liked reggae music, they didn’t like this music…. now certain people in charge of the media, the people who produce reggae and sing reggae, those people will be respected because reggae is the poor people music but it’s the same music they didn’t like or used to says as a dotty music, a drunken music…..that’s what they used to say..now we have reached a time where reggae music has been established and the system can make money with the reggae music and they control the media…. in Jamaica people are still singing reggae, playing reggae, doing reggae and loving reggae, people are still producing reggae in Jamaica, good reggae too!!look at Luciano, who is a proper and good reggae artist, how can Luciano in a situation like this can be respected in that manner, look at Dennis Brown, Gregory Isaac, Johnny Holt, Sugar Minnot now they don’t have respect for the past music but some of people of the past sell out the music too, some of the producers and big producers did too and exploit people and that’s why the music is in the position where it is and the reggae artists are in the position where they are..because mistic people made this before ….so reggae can’t dead no matter what they ….we are the creators of this great music and can’t go away , can’t dead….we lean you and when we ready we’ll gonna take it back, remember!!!

7: reggae revival in Jamaica , a lot of new roost is this true…what do you think about reggae inJamaica…

Yes, there are a lot of new roots reggae artists in jamaica, in england too you have to understand that many original pioneers or reggae artist left Jamaica and came to england, had children here and so now a lot of people like reggae and live for reggae here in England as artists too , so it’s like a competition between african urban in jamaica and africans urban in england what would be nice will be that we realize we are the same , went throughout the same oppression and what we need is to unite and come togheter and support each other and bill ourself as a nation, so tomorrow will be a better day, spiritually, physically and musically. like a spilff!!

8: reggae in the europe ..sound system culture in UK,France,Italy and Spain is this the future?

There are a lot of people playing reggae all over the world, reggae has gone global, reggae has gone international, reggae captivated a lot of people, the only thing is that sometime is that the creator of this music don’t get the respect, the people who play this music from jamaica don’t get respected and we are talking about respect at the financial level…….a lot of people take the reggae, or use the reggae and don’t want to give respect and credit to people who originate the music nor for the veteran artists not get the work they are supposed to get or payment they are supposed to have…..so big respect for the people who keep the music real and have heart and love for the music, who have love for the reggae artists big respect!!!