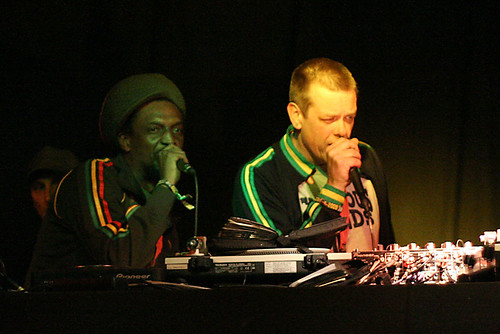 Dougie Wardrop started his career in music production with humble means while running Dub Shack Records at Camden lock market. Inspired by early digital steppers such as Warrior stance by Dread & Fred and Seventh seal – Sound Iration (Manasseh), his first attempt at mixing was the instrumental Stepping time – recorded on 4-track at Nick Manasseh´s house. It was released under the name Centry in sept 90 and became the launch of his imprint Conscious Sounds. Getting record shops to stock the tune turned out to be a hassle at first, but after receiving extensive play by Jah Shaka the sales picked up and gave encouragement for further releases. After working with Manasseh under the name Centry on the labels first three singles, Centry was later to consist of Nigel Lake, Chris Petter and Dougie. The money made from the releases was invested in a 8-track and premises was shifted to Nigel Lake´s house where it stayed for 2-3 years. The studio has since then found a permanent address and advanced further with time. Operations under various names such as Bush Chemists, East meets West, Messenjah, Dub Specialist, Hydroponics and named Centry have included numerous collaborators. The most frequently used has been Bush Chemists, consisting of Dougie, Chazbo and Culture Freeman. Messenjah was Dougie and his apprentice engineer Prento, who later on turned his attention to other forms of music after learning the trade at the studio. Mixing in oriental flavours to the steppa-dish – the East meets West-project was a collaboration between Dougie and Hiroshi who after working a while at Conscious Sounds, overstayed his visa and got deported back to Japan.
Inspired by the pioneers in dub, Dougie has never been shy to experiment but the core of the music has for the greater part been steppers. Running for over 15 years, the label has survived the trials. A deal was struck with Dubhead label in late 90´s for the manufacturing and release of music being produced at the studio. The deal was abandoned when unpaid royalties and opinions on the direction of the music lead to disputes. Conscious Sounds is now once again a independent label in the hands of Dougie and has in recent years seen something of a new golden age. New means of exposure through the internet has meant that a new market has opened. With a new generation of dubheads taking a interest in the music, the demand has been supplied for re-releasing long out of stock material and the side-label Lovedub has also been launched to feature tunes and remixes previously only heard as dubplates. A string of 10 inches of constant high standard has seen the light in recent times and the inspiration to create new music seems to be running high as ever. The East London studio is used not only for music released on the Conscious Sounds-label, but other labels such as Jah Warrior and Reggae On Top to name some, record and have their music mixed there as well.

I was involved in music since an early age…basically I love d the music and I loved the idea of producing but I never had the opportunity because when I was growing up going to produce in a professional studio was economically impossible…it’d cost a fortune to go to hire a studio, get professionals musicians and technicians…..my first chance come when a friend of mine..his name was Tony Benji, he took me around to Manasseh…he has a little studio in his bedroom, he had four tracks and he was making dub tunes with that…I thought he was wicked ..and from that point I was like …hooked!
I wanted to be like Scientist or King Tubby and from there I knew I can do it…the technology was there and that’s how is started, with Nick Manasseh…he gave me my first opportunity, looking at mixing desk and learn how to tweak cue things and learn how the echo would feed back in the mixer…so this has been my first start… at Manasseh!

It was a kind of warning..I pressed around a thousand copies and I sold 300 or 400 hundreds initially and I was living in this house in Hackney and I put all the record in this wardrobe at the bottom ….600 copies..3 moths later actually I moved and I couldn’t take the records with me….I went back 2 weeks later to that house and they said that the older stuff has been ejected and that’s was it.. all my records were gone….but I ‘ve got enough money from the first pressing, I didn’t mention to make any money but then I had enough to finance the next one which was with Tenastelin “Contact Joe”…that was the second one …     that come when Nick played tunes that he’d done and I heard the tune and that was wicked, that was a great single, so I pressed that and that went pretty good, Jah Shaka used to play and sold a few copies and for the next one which was Original Formula by which time Nick had progressed and upgrade from the 4 tracks he was using to an eight tack machine… so basically I ended up being the four track machine from Nick…another drum machine and cables and started to do my thing, basically…me and a guy call Nigel Like and Chris Paw which was originally Centric…they were really musicians, me were not a musician even I can play guitar, a few chords, I wasn’t really confident to do my tunes, I wanted to bring in someone new who can do … and that’s where started my own things, really….my own studio, you know what am saying….

Conscious Sounds, the original name, originally come from Freedom Sounds because I was trying to understand what to do with records….I was playing a lot of them and I looked them and I figured out Freedom Sounds….Sounds ….Conscious Sounds that sounds wicked.. and that’s what it……..a lot of music, it’s the only thing I wanted to do….I did jobs in the past, working in the mud yards, in building sites, and was rubbish for me, it didn’t work…I always wanted to go to work and do something that I like to do..so work didn’t became a sort of Monday feeling, something that you have to do everyday……I actually had to go to work and look forward to go to work….the hardest part was trying to survive and get the money from making music and that’s has been the hardest struggle, trying to make a living off music it’s very very hard, especially in nowadays… but so far we are doing, it has been a long time … I’m n to gonna be rich but have enough money to survive and not going back to rubbish jobs….

I listen to a lot of music, reggae from the 70’s, punk music then …rocky…and something I get ideas from that..I can listen some chords or some things… and say..hoo, that little thing, that’s interesting…from that little thing I get an idea and I start making tune from that ..or something I came in and play a couples of chords and it works on that or sometimes I can go to a dance … like when I voiced Mamane … I’ve heard him in Romania, he sound wicked, it was there in my mind I wanted to voice him…so just things sparks…I didn’t mean to go to Romania for this, he just sound wicked and so I tought I wanna get him to sing one for    me….the same with a tune, it could be reggae , it could be pop or hiphop, It could be anything hiphop…..and if I think that something sound good, just a little bit slower …and that little bit will be parking in my brain to make me do something else    …..and when I get the tune out of it,    you don’t know that it can from there but that’s the sort of things that make me wanna do that..

….There is a lot of music like Perry but when it comes to the hard tuff dub…King Tubby was the best …..he had that big step, not clean sound but very dirty but it was wicked…. King General was a friend, we were living in the same house in Hackney, we grow up with reggae in the 80’s , he’s older than me he’s from the 80’s, you can hear from his voice ..Tenastelin , all the dos that came with that sound at that time …If you listen to some of the music that is coming out now from Europe, it has very reggae feelings… but it’s more based on the techno side, call it techno dub of whatever …it has gone sort of that direction….when I was influenced by people like King Tubby and the real reggae instruments like guitars    ……I can made my interpretation of that with digital equipment….the new people they are sort of listen to the new stuff, the uk sound and made trip interpretation of that…. which can go more digital, away from reggae, really in my opinion, and go more like techno kind of stuff, with all that sort of sounds that drift away more from reggae …..

If I’m not in the studio I’m away…that’s it it’s my job…I work in a day to day basis…some you can came come at 2’00 o’clock to mix a song, that’s it… if I’m not in the studio that’s because I’m doing a show … music is my only occupation, it’s all what I do…If I have a day of I’m still listening some sort of music, music for me it’s 24/7…it’s never stop, I can’t stop..because if I stop then if I stop, you know what I mean, I’ve had it.

What I wanted to create it was like a sound system but like on stage…when we went first on tour back in the early 90’ people didn’t know what to make of it …because back in France or Europe in the early 90’s dub didn’t exist, there was not scene… I always thought that when we were on stage, they didn’t really know what to make of us….so we were trying to do a sort od stage with me on a mixing desk then you will have a singer,    a bongo player ..like a band even if it wasn’t a band, we were still ruined dat tapes ..and it was hard at that time, we just were trying to get across but now in France there are millions of sound system ….France has just gone bananas, know what I mean, so yea the live thing, its semi live, its like a sound system but on stage.[:]