1: can you tell us how you become involved with sound system…when was the first time you saw a sound system, info and memories…

“Jah life” Sound System was one of the first that kind of inspire me, they were my neighbours, so they used to do the sound check at the back of the apartments – you can see the videos on youtube – they used to have blues parties in the flats but essentially when I heard the music it was a “studio one” thing and that really turn me onto the reggae…..I was 18-19 at the time and I liked the reggae as well, all the reggae and it just clicked, it clicked with me when I heard “Studio One” tunes because I was into old music, I was into rhythm& blues when I was very younger, I was a rocker with leather jacket like rockers, we used to listen to rhythm& blues and rock&roll and stuff like that …..you got to remember reggae comes from rhythm& blues and soul and jazz so really the first “Studio One” tunes really done it for me and when it comes to dub, those tunes to me as well were the tunes that turn me into dub, the real rock version on the original press, the first press, quite rare to find now…and that is late 60’s early 70’s, it was at that time Scientist was going on and all that we were listening to it , essentially “Studio One”and early King Tubby and all that stuff.
Also I liked the idea of a different use of the space in arena, at that time there was only rock&roll concerts with bands with a small PA system, with no bass and rock band was kind of big speakers, but it was all live music and it be ended up all facing at you….so it is a type of arena which I like about a sound system because it wasn’t set in a rock&roll set-up with just speakers facing one way down the hall, it was speakers all the way around the hall and speakers even in another room, you could have speakers everywhere and it was taking the music to the people directly on the street, I mean that is a front line, sound system is a front line of music, because it’s not a radio, not a telly, not video, it’s on the street amongst people, so it’s open to everybody, so with sound system you can get in trouble and stuff like that because it challenges the system straight direct on the line, a bass is roaring like a lion and that’s what it suppose to be, with reggae music the melody is in the bass, although there is other melody but essentially that’s what you following, it’s like a heart, its a heart of this, drum& bass is a heart with reggae and that’s why you have some great reggae combinations like drum&bass players.

2: can you tell us about Brixton, Reggae and the first 80’s:

I grow up in the country side and when I first came to Brixton it was mixed…. so you had the Irish and you had the cockneys and some middle class people as well, maybe some few asian people from Kenia and a few Sikh people and that was it, some few Italians as well, but mainly South London and Irish and Jamaican or West Indian, Caribbean, at that time Caribbean people were just living in certain areas in London, Birmingham, Bristol, Leeds…there were few other English white guys who grown up amongst it… so I used to go to this dances and then I used to hang out with those guys and I was the only white one who would hang out with them, the music was always of bringing people together, fighting the system, it wasn’t commercialized , it was a way to lift the spirit, spreading the message and the sound system was the only medium, because there was no radio, no pirate radio at that time in the early 80’s, it was only in the mid 80’s to the late 80’s pirate radio came in, so before that it was just sound system to get the message across and that was about sound system being the frontline medium….I started to get into the music, loving the music and I started buying records.. I was buying jamaican records in first 80’s, records and cassettes were the only thing thats was around and a lot of things was on cassettes, because people used to share cassettes and give cassettes and stuff, so I used to get reggae on cassettes from people as well and used to get sound system cassettes by sound system clash or sound system event as well………..I used to go to Clapham and Junction, there was located Dub Vendor Records in the early 80’s and it was wild back then, it would be packed if you are on Saturday or Friday…. It was packed and it was a long counter with about 4-5 people serving, it will be couple of white people there, it would be a lot of sound guys, if you’d be there in busy day it will be packed, you have to squeeze in to get a space and it will be a big man paling the tunes upon the counter because the guy will play the tunes on that thing and they just took it over, took it over ……and maybe there were two left and three people want it and if you got one and the man next to you didn’t get one, then you might start asking you for the tune…..you get some of the younger like youths, kind of more conscious about the fact you were white but, the older guys didn’t really think like that, the Jamaicans didn’t like it…it was hard…….I must mention one other thing about record shop, the other record shop I used to go was Pecking record shop in Askew Rd. in Shepard Bush and it was official Studio One record shop, were they sold Studio One and Treasurer records and I remember that were 90 pence each and they when up to 1.10 pound, an album was 4.99 pounds, this was exactly 1986.

3:Info and memories about London and the sound systems in the 80’S:

4:building and playing a sound system in London:

We start to get some boxes, we bought some boxes from Young Lion sound and I still got them to this date, the same boxes, 30 years later still got the same boxes, I can send you some pictures if you want, they are vintage!
In 1988 we build the sound system, about two and an half free key 3000 Watts and we had 5 or 6 scooping, 15 inc and 18 inch, we had some mid range, some twitters, a turntable , we started to use technics turntables by 1987/88, and we were doing warehouse parties, clubs, colleges…..I made a video and it is on youtube now on 1987 and you can see the sound system, and in 5 years we built all this up, and this was done for Charlie Gillit, Ralph Trade Record…..He said at the time, he thought that was at the time way ahead of his time, because it was two white guys doing reggae, you know like proper reggae. There were English white guys doing DJs at that time, there were more than me, I knew I guy in Brixton, Ice Man, he was a good friend of mine, from many years and he died a couple years ago, Irish family from Brixton road, hard working Irish people. He grow amongst Jamaicans in the school, he was the only white guy in the school, we grow up together, we were the same generation, first generation of black and white started mixing in the UK. There was Snow Man as well, he was a DJ for Jack Dan Rocket Sam. There was Ice Man and Snow Man, people used to joke, when white people used to say blacky and black people used to say snowy.
We were doing little parties about 1984 or 1985 and then we started to do little sound system events and then we started some warehouse parties with some other people we knew from the club scene,… We have been abroad as well, because, I got to Amsterdam and secure two dances gigs one in Rotterdam and one in Amsterdam in 1988 and we took the sound system with us. We were selling tapes at the time, we were making a tape of the sound, it was hard I didn’t have much money back then. We used to do a lot of free parties as well, we didn’t get paid much for it, just got petrol money, you know. People were asking to do parties for the next squat. I remember some squat houses near Black Fries, there were a lot of streets to squat and they came and ask to do parties in the street, and there where crazy hippies, any kind of people, all mix-up. By that time we were doing big events too, coaches full of people to follow the sound system, we were doing things in Oxford in the Caribbean Center, we get two coaches from London. You get a coach from Brixton, you can get a coach from Hackney, and they come to Oxford where the sound play and that used to happened a lot….. so that was happening in 88-89 and house music come along and then the people I would do a sound system with got into a house music scene ‘cause at that time we weren’t just playing roots and cultures, we were playing all sorts of music ‘cause that was the 80’s….. we were playing the music and seeing the music as a way of bringing people together, unifying people in these times because we saw the music as our weapon we want to put our anger in the music and not in the street. There were a lot of people in the 80’s really up for fighting the system, taking on the arms struggle. Me I used to sa that I’m not into this because I’ll fight with music, I’ll inspire people because reggae inspired me to change for where I thought and do things. Reggae inspired me, when I came from the country to the city and I saw Rastas and Jamaicans and I associate, relate to Jamaican people because they talk about country and good. Jamaicans they know about their country life even if they live in the city, they are still knowing the country style, especially the Rastas.
London was completely different then, you get a lot of this funny little clubs, you could rent a place for less than nothing, people will give you a place to do it. 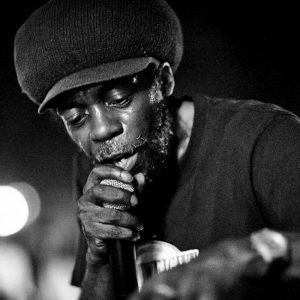